The Book of Names 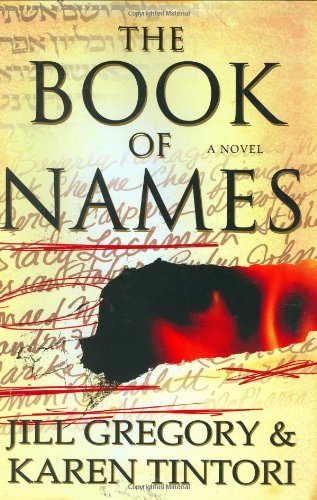 David Shepherd knows the names of the thirty-six Righteous Souls, upon whose existence -- the Talmud says -- God keeps the world in existence. Thirty-three of them have just been murdered. Now David must race to find and save the remaining three – one of them his young step-daughter -- to save the world.

The Book of Names is Karen Tintori's fifth publication and her fourth collaboration with co-author Jill Gregory.

Within each generation, there are thirty-six righteous souls. Their lives hold the key to the fate of the world. Now someone wants them dead.

When a childhood tragedy comes back to haunt Professor David Shepherd, he finds himself in possession of knowledge that holds the world in a delicate balance. He uncovers the Book of Names---an ancient text originating with the biblical Adam, and thought lost to history forever. By Kabbalistic tradition, the book contains the names of each generation’s thirty-six righteous souls---the Hidden Ones---by whose merits alone the world continues to exist. Legend holds that if all thirty-six Hidden Ones were eliminated, the world would meet its end.

When the Hidden Ones start dying of unnatural causes, the world grows increasingly unstable: war in Afghanistan, massive flooding in New York, brutal terrorist attacks in Melbourne, a tanker explosion in Iran. David finds himself battling against the Gnoseos, a secret religious sect whose goal is to destroy the world by eliminating all of the righteous souls. David’s involvement quickly turns personal when his stepdaughter’s name is discovered to be one of the endangered. With the help of a brilliant and beautiful Israeli ancient texts expert, David races to decipher the traditions of the Kabbalah to save the righteous souls, his stepdaughter, and perhaps the world.

“Relentless and riveting, The Book of Names speeds you across continents and centuries in the ultimate seductive read. From fascinating characters to real-life legends, this debut ranks as unforgettable.”
---Gayle Lynds, New York Times bestselling author of The Last Spymaster

“The Book of Names grabs you on page one and doesn’t let you go. Weaving together the Kabbala, the tarot, and the forces of good and evil, this chilling thriller has a self-assured voice and all the right elements to make for a nonstop, nail-biting read.”
---M. J. Rose, author of the international bestseller The Venus Fix

"Gregory and Tintori('s) intriguing premise...helps separate this tale from garden-variety religious thrillers. And where others have tried and usually failed, the authors give succinct explanations of the principles of kabbalah and Gnosticism, both complex and often misunderstood. Compulsively readable."
---Booklist

"The Book of Names...(is) an intelligent suspense thriller...a tense murder mystery (that) self-assuredly fulfils the requirements of the religious thriller in terms of characterisation, plot and pace. With...the addition of many religious legends, this story has real breadth. The Book of Names gathers together all the elements that could make it a huge commercial success."
---The Economist

Purchase - Follow these links to purchase The Book of Namesfrom online retailers.

Das Buch der Namen - The official website for the German translation of The Book of Names.

Audio Book - Listen to a sample of the audio book from Brilliance Audio's site.

International Covers -  Here are the covers from some of the international editions of The Book of Names.